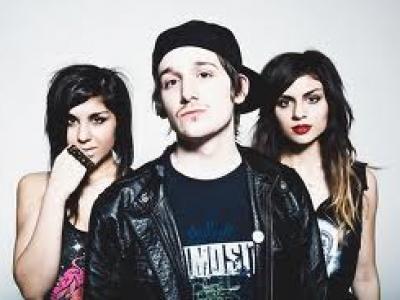 Take one producer, two sisters who are singers/songwriters, add about three or four different electronic dance genres, remove all stereotype features et voilà: you’ve got EDM band Krewella. The band consists out of sisters Jahan and Yasmine Yousaf and Kris Trindl a.k.a Rain Man. All three of them are from Chicago where they met in High School. Jahan and Kris used to hang out together; the way teenagers hang out with each other during High School, chilled. Kris, a Metal fan, got into producing because he heard Justin Timberlake’s ‘Sexy Back’, which was produced by Timbaland. He was so impressed by the R&B producer that Kris decided to start producing his own music, but chose EDM instead. Kris was looking for a vocalist, because he knew he wanted strong vocals for his tracks. So he asked Jahan, who hesitated at first but then fully committed. When they needed one more extra vocal they didn’t look any further than Jahan’s little sister Yasmine and Krewella was born. Mixing school with their passion, on 06-08-2010 the group decided to quite school and fully commit to making music and don’t stop until they’d reach success. It took the band about two years to get there; it was their album 'Play hard' that got recognition in the US and their song ‘Alive’ that reached the mainland overseas. Their music is a mix between house, dubstep, hardstyle and drum 'n bass, which has resulted in collaborations with artists such as Nicky Romero and Headhunterz. But also Hardwell, who’s remixed their hit ‘Alive’ and W&W who remixed their song ‘Live For The Night’. Their non-controversial music provides a variety of fans and audience, this allows them to take stage at huge events such as Ultra Music Festival, Electric Daisy Carnival and Stereosonic. Risking everything to be able to do what they do today, Krewella is definitely different, edgy and not to be labelled by one genre.