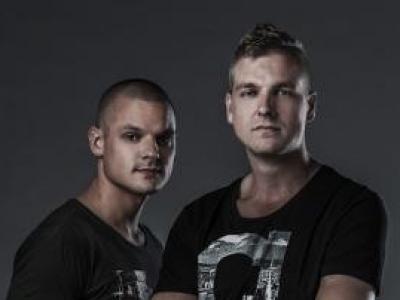 In Europe, Psyko Punkz (known individually as Sven Sieperda and Wietse Amersfoort) need no introduction. The duo are among the top ‘Hardstyle’ purveyors across the Atlantic and are increasingly popular worldwide, thanks to their unique and hard-hitting take on the sub-genre of EDM that shows no signs of slowing down anytime soon. “We’re pretty mainstream with a little raw edge on the top of it,” explains Wieste regarding Psyko Punkz’s explosive sound that has won over countless fans since they first burst onto the scene in 2008. “It’s been pretty crazy, but great,” the producer adds regarding the rise of the duo worldwide.

Few could have anticipated what was in store for the Dutch duo when the two first met by chance at a party and discovered that they shared a mutual love and appreciation for electronic music, and more specifically, the Hardstyle genre. Upon joining forces, the two were quickly signed to the Belgian label, Dirty Workz, and they began performing live DJ sets at some of the largest and most well-known events in the EU, including Tomorrowland (where they will play for the third year in a row this summer), Qlimax, Hardbass, Decibel, Defqon.1 (NL and AUS) and Germany’s Nature One.Truly Hardstyle in sound, image and lifestyle, Psyko Punkz’s reputation for energetic live sets has even won them shows far away from Europe, including stops across the U.S., Australia, Korea and the United Kingdom. “Our performance is always really energetic,” says Wieste, who calls Utrecht home. “Things can get crazy,” the Dutchman laughs regarding the growing and loyal fan base that turns up at live gigs, and outside observers have noticed just how many fans have latched onto the twosome, over the past three years especially.

Tracks such as their “Psyko Foundation” and “Bass Boom” have won them an actual army of followers, nicknamed Psyko Soldiers. “Our fans are really dedicated....we have loads of fans with Psyko Punkz tattoos” adds Wieste.And it’s not just the guys, either, attracted to the melodic yet pounding rhythms that typify a Psyko Punkz track. “Most people with tattoos are girls,” the DJ says, noting that goes against the stereotype of Hardstyle fans skewing male. In 2011 proof started to emerge of the duo’s growing influence, thanks to fans of all genders voting them into theprestigious DJ mag Top 100.